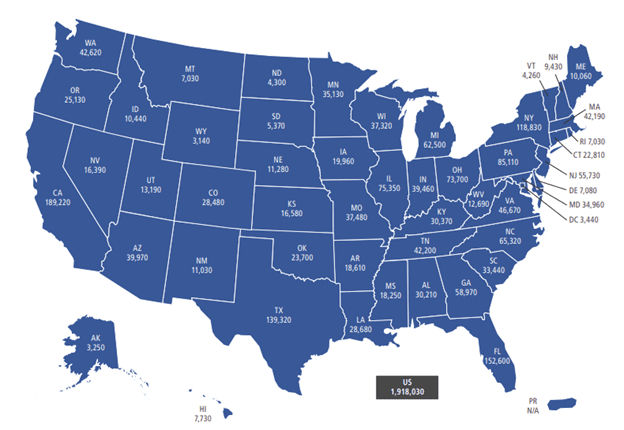 How Much Progress Has Been Made Against Cancer?
Substantial progress has been made against cancer in recent decades. The best measure of this progress is cancer death rates (also referred to as mortality rates) because they are less affected by changes in detection practices than incidence (new diagnoses) and survival rates. The overall age-adjusted cancer death rate rose during most of the 20th century, peaking in 1991 at 215 cancer deaths per 100,000 people, mainly because of the smoking epidemic. As of 2019, the rate had dropped to 146 per 100,000 – a decline of 32% – mostly because of reductions in smoking and advances in early detection and treatment for some cancers. The decline in the death rate translates into nearly 3.5 million fewer cancer deaths from 1991 to 2019, largely driven by progress against the four most common cancer types – lung, colorectal, breast, and prostate (Figure 1 and Figure 2).